The Eagle Eye 22 seminar at NRDC-ITA

Protection of the civilian population in armed conflicts The event was attended by senior Alliance and Armed Forces officers, as well as academics and specialists in the field of humanitarian assistance in order to share knowledge, stimulate an in-depth discussion and gain awareness about NATO challenges for the protection of civilians in conflict. With reference to the current crisis in Ukraine and the recent military intervention in Syria, the operational prospective on the protection of civilians is now on NATO’s agenda. In fact, during the last summit in Madrid, the Alliance provided a new definition of security with an human approach.

The Commander of NRDC-ITA, Lieutenant General Lorenzo D’Addario, welcomed the guests and kicked off the event underlining that the initiative marks a very significant moment in the Command’s ongoing commitment to implement the planning for the next exercise in Norway in the JTFHQ role and in sight of the Headquarters recalibration for the warfighting role.

Dr. Marco Grandi, Military advisor to the International Non - Governmental Organization (INGO) of PAX for Peace moderated the seminar in its two sessions. The first one focused mostly on the legal aspects of the protection of the civilian population in the cyber domain and on the strategic level considerations. The second session examined in depth the historical review of the involvement of civilians in armed conflict and the new US doctrine about the impact of military operations on the civilian population with a virtual simulation of civilian involvement in war through the use of an Artificial Intelligence program.

It is worth to mention, among the briefers, the Associate Professor of Political Science at the University of Turin, Prof. Stefano Ruzza, Lieutenant Ivana Kudlackova of the legal office of SHAPE, the Parliamentary Deputy and Secretary of the Ministry of Defense of Latvia, Dr. Baiba Bloniece, the Head of the ICRC (International Committee Red Cross) delegation to NATO, the European Union and the Kingdom of Belgium, Mr. Christopher Hall, the Governance Advisor at SHAPE, Dr. Marianna Tonutti, the Advisor for Humanitarian Assistance at AFRICOM (USA), Dr. Elizabeth K Blanchford, and finally the Senior Director of the CAE (Canadian Aviation Electronics) Single Synthetic Environment, Christopher Coates.

The DCOM of NRDC-ITA, Major General Jeremy Bennett, in his closing remarks, thanked the attendees for their inputs to a stimulating discussion and highlighted the importance of topics as the centrality of protection of civilians, the necessary coordination with institutional organizations and the enhancement of human security resilience. 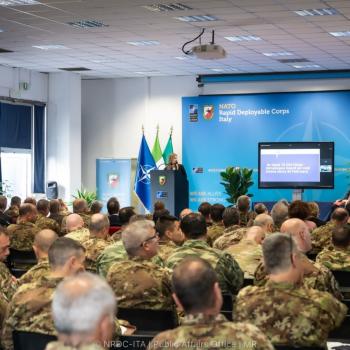 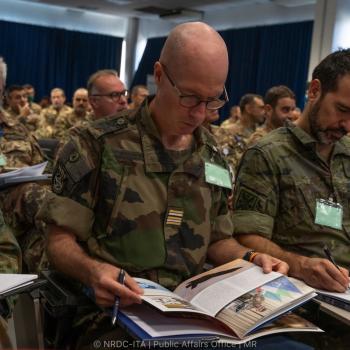 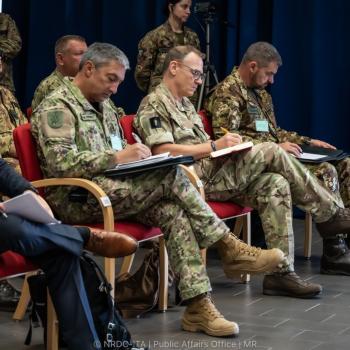 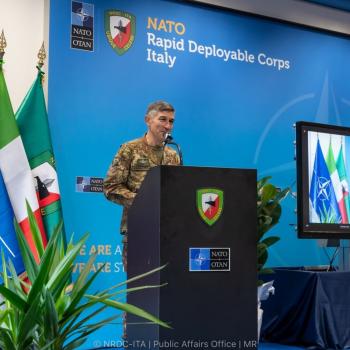