NRDC-ITA takes over role as LCC for NRF 2018 Solbiate Olona (VA), 10 January 2018 - Today, at the "Ugo MARA” barracks, in the presence of the Chief of Staff of the Italian Army - Lt. General Danilo ERRICO, of the Commander of the Allied Joint Force Command – Brunnssum Lt. General Salvatore FARINA and of the Commander Allied Land Command - Lt. General Darryl A. WILLIAMS - took place the HandOver ceremony as Land Component Command of the NATO Response Force (NRF) between the Allied Rapid Reaction Corps (ARRC) commanded by Lt. General Tim RADFORD and the Nato Rapid Deployable Corps - Italy (NRDC-ITA) commanded by Lt. General Roberto PERRETTI.
The Nrdc-Ita assumes for the fourth time the responsibility of leading the Land Component of the NATO Response Force after a long and articulated period of preparation lasting over a year, which saw the Headquarters engaged in numerous and complex training activities aimed at completing individual training of staff and testing and fine-tuning work procedures, before being declared "combat ready" with the exercise "Brilliant Ledger 2017" that, under the careful supervision of a team of 40 experts military evaluators, has seen both in Solbiate Olona (VA) and Bellinzago Novarese (NO) over 1000 soldiers from 15 nations of the Alliance and 85 different units of the Italian Armed Forces.
The NATO Response Force, was created in 2002 and is a high-readiness Joint multinational force, made up of Land, Maritime, Air, Special Forces and Logistic Support components with personnel and vehicles supplied on rotation base by member countries, to enable the Alliance to face immediately to the wide range of security challenges, from collective defence to crisis management. Following the decisions taken at the Wales summit in 2014, the NRF was enhanced of the Very High Readiness Joint Task Force (VJTF), an extremely flexible and modular force, able to deploy in a very short notice. As a whole the Nrf is made up of about 40,000 men.
The NATO Rapid Deployable Corps - Italy is a multinational Headquarters based in Solbiate Olona (VA), Italy is the leading Nations and provides about 75% of staff. The remaining 25% are military personnel from other twelve countries: Albania, Bulgaria, France, Germany, Greece, Hungary, the Netherlands, Slovenia, Spain, Turkey, the United Kingdom and the United States for a total of about 400 men and women. Soon, 4 nations more Canada, Latvia, Lithuania, and Romania, will join the headquarters bringing the number of contributing nations to seventeen. 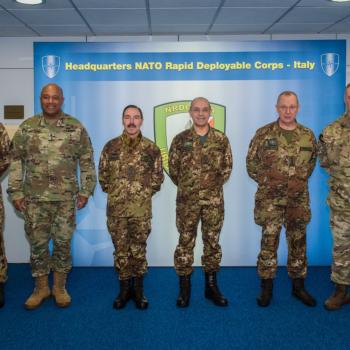 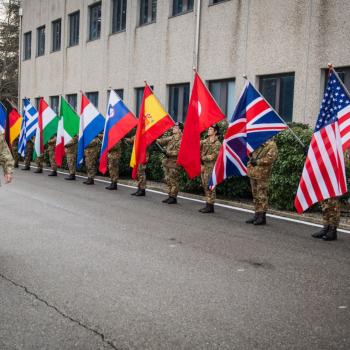