As a result of its 10-day Misssion Rehearsal Training at NATO’s Joint Warfare Centre (JWC) in Stavanger, Norway, HQ NRDC-IT has comfortably met the criteria required to assume command of NATO’s mission in Afghanistan and form the next International Security and Assistance Force in August. 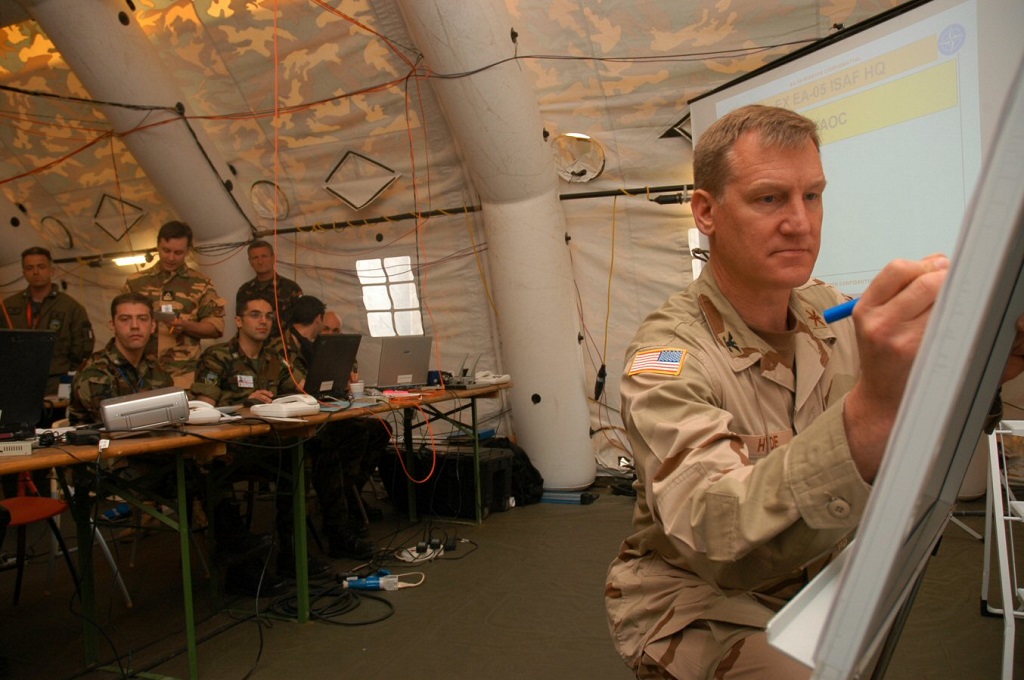 Stavanger, 24 June 2005. As a result of its 10-day Misssion Rehearsal Training at NATO’s Joint Warfare Centre (JWC) in Stavanger, Norway, HQ NRDC-IT has comfortably met the criteria required to assume command of NATO’s mission in Afghanistan and form the next International Security and Assistance Force in August. The Headquarters was given the green light by demonstrating, as a result of its own comprehensive training and preparation since January, that it can assimilate, coordinate and plan for the range of commitments, challenges and crises that the NATO mission and the country of Afghanistan currently face.

Exercise Eagle Thunder
The training period was designed by Joint Force Command Brunssum, the NATO operational Headquarters directing the Afghan mission, as part of the mandatory mission rehearsal training for Headquarters and personnel deploying to Kabul . The test also offered the first opportunity for the Staff to meet and operate with the 100 augmentees, officers and soldiers of all NATO countries, who will swell the ranks of the Kabul Headquarters and assist it throughout its 9-month deployment. The main focus of the exercise was the upcoming National Assembly and Provincial Council Elections, due to take place in September and the subject of extensive planning and coordination with the Government of Afghanistan and the United Nations Joint Election Management Body. Alongside preparing for this milestone, the exercise events list ensured that at all staff levels the Headquarters was tested in the full range of its processes, from day-to-day force protection to planning for NATO’s expanding role in the country, from reacting to natural disasters to organizing routine press conferences. The reality of the exercise was considerably enhanced by the presence of “Observer-Trainer” staff currently manning ISAF Headquarters and a representation of personnel from organisations operating in theatre, including UNAMA, ICRC, and CFC-A. The Key Leaders of the Headquarters further had the benefit of briefings from Minister Chetim, NATO’s Senior Civil Representative in Afghnistan. Not all was work, of course, and the Headquarters made the most of opportunities to examine Stavanger and the beautiful Norwegian fjords. The 20 hours of daylight enjoyed by the region at this time of year also offered the perfect justification for a few evening manoeuvres in the town, imposing further challenges onto an already gruelling exercise timetable. Training completed, the Headquarters has now recovered to Solbiate Olona. The aim is to take some well-deserved leave before deploying to Kabul in time to assume command of the NATO mission at the beginning of August, marking the first operational deployment for a Headquarters that has proved ready for the challenge.