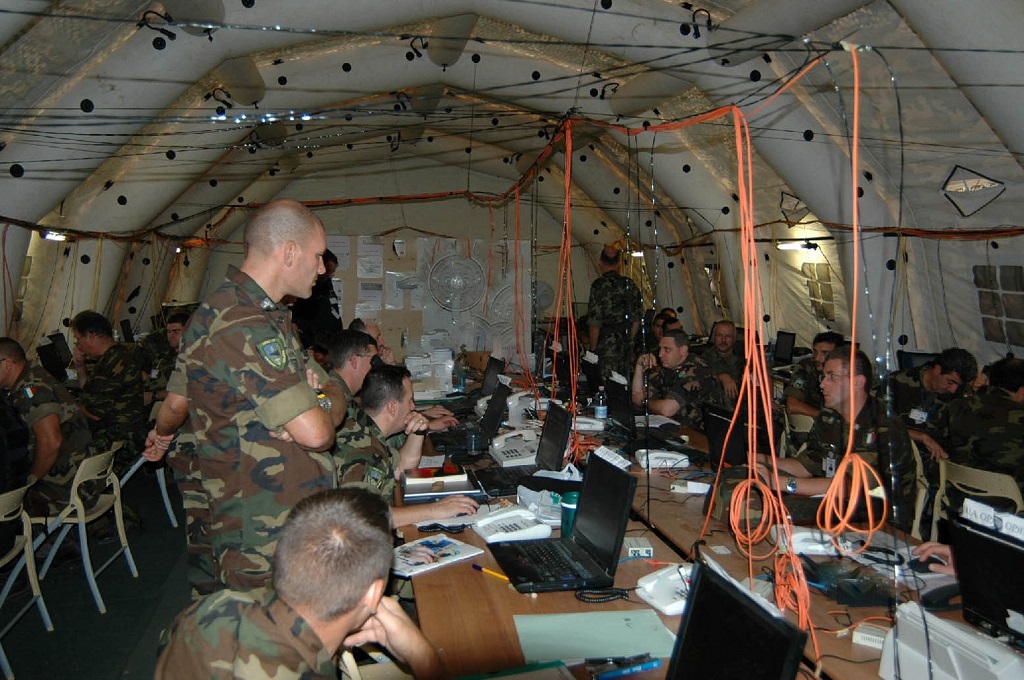 HQ NRDC-IT shifts its focus to war fighting operations as Exercise EAGLE BLADE 06 gets underway. After several months of preparation of scenarios, plans and logistic resources, around 1,100 NRDC-IT personnel have deployed to the Civitavecchia training area near Rome.

Under the command of Lieutenant General Del Vecchio, the exercise sets out to perfect the command and control aspects of war fighting and security and stabilization operations (SASO). This is no easy task. Before deployment, HQ staff have conducted the necessary campaign planning based upon the scenario of a regional conflict in a fictional country. All headquarters staff also attended a pre-deployment programme of seminars, lectures and briefings to fully prepare them for the operations they would meet during the exercise. Quite apart from the planning and build-up, the physical deployment itself involves approximately 800 logistic and communications specialists from the HQ’s support units.

If that were not enough, the staff and the exercise control elements have also been augmented by personnel from both within Italy and from other NATO HQs such as LCC Madrid. In this way the total number involved approximates the HQ’s full crisis establishment of just under 800 officers and soldiers, as well as all the support personnel mentioned.

According to Colonel Perretti of the Operations Branch, the exercise is “certainly challenging as it aims to test our new structures and our ability to conduct war fighting and SASO. In particular we aim to demonstrate proficiency in operating against multiple, simultaneous opposing forces, including conventional and insurgent forces, and non-state and criminal threats. We will rise to this challenge however”.

Rising to this challenge is particularly important as HQ NRDC-IT looks forward to its role as part of the NATO Response Force in 2007. Whatever the challenges on the exercise, the experience will certainly help refine and practice the skills necessary if called upon to respond next year.