Representatives of NRDC-ITA HQ attended exercise EAGLE TREK 2007 from 24th September to 1st October 2007, whose aim was first to familiarize the participants with the mountain environment, and second to implement a team building aspect. 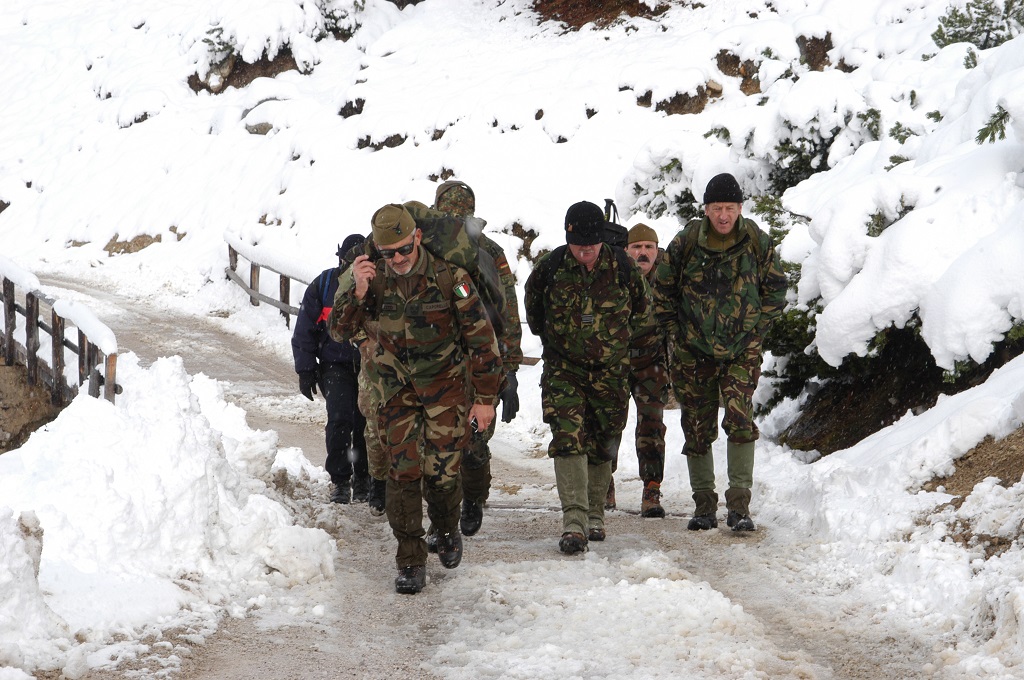 Representatives of NRDC-ITA HQ attended exercise EAGLE TREK 2007 from 24th September to 1st October 2007, whose aim was first to familiarize the participants with the mountain environment, and second to implement a team building aspect. The participants were hosted in a former mountain artillery regiment barracks in Dobbiaco, which is a small, pleasant village in the middle of Pusteria valley (Bolzano).

The location was chosen very cleverly, since the area is full of different tracks with a large diversity in terms of length and difficulty. This clever decision allowed the organizers, whose chief and project officer was LTC Pietro CAPORELLO, to adapt the programme to the adverse weather conditions the group was forced to face, by reshaping the program in due time and with proper alternatives.

The group, despite the whether conditions, performed 5 trekking activities and was able to carry out 2 ascents of a pretty fair significance, of which, the last one led the group to a peak of almost 3,000 meters above the sea level on a cloudy and snowy day. This was possible, first of all because the walks and ascents strictly followed progressive criteria, imposed by the experience and soundness of an “old” alpino such as CAPORELLO. Secondly, but perhaps even more importantly, we have to thank for such a success the high professionalism and mountain experience of the guides leading each team. No doubt, without their help the successful ascent of the last day wouldn’t have taken place. That’s why it’s hereby suitable, as a deserved award, to mention them as follows: Mllo BENVENUTO, Mllo CORNO, Mllo DIONISIO Magg and, the already mentioned, LTC CAPORELLO.

Another aspect that gave an added value to that experience is the historical one. In fact, the group enjoyed its treks in an amazing environment not only under the point of view of the natural beauty, but also due to the discovery of places which were theatre of heavy fighting between Italians and Austrians during the WWI. In particular, the ascent of Monte Piano was of particular importance under this last point of view, where the real trenches can be visited and walked on, and the visit to the museum located at Valparola pass was of high interest for those who like the history of that period.

In conclusion, Eagle Trek has been a military and demanding exercise, but with an amount of satisfaction in return that surely fascinated all the participants far beyond their expectations.