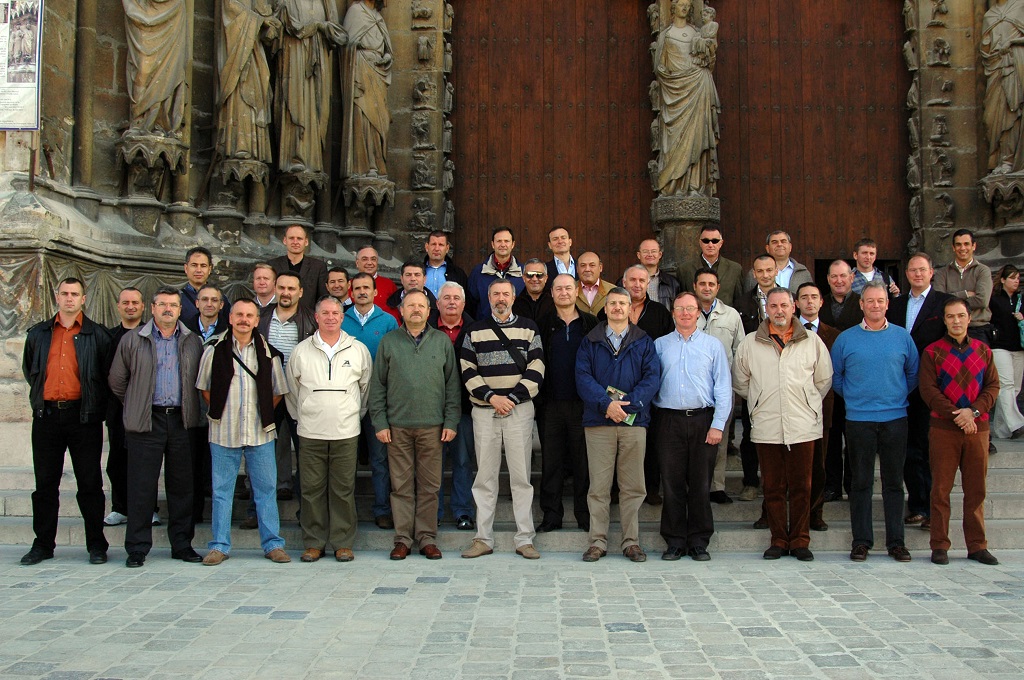 Eagle Tour ’07, the yearly (NRDC-ITA) battlefield tour (BT), took place in France and Belgium, throughout the Ardennes region, in the area of Fermont, Villy la Fertè, Sedan, Monthermè, Dinant, Stonne and Noyers Pont Maugis. The BT, the only one planned for 2007, lasted 6 days (travel included), from 1st to the 6th of October, a Monday to Saturday tour organised by the Engineer Branch, as by tradition in HQ NRDC-ITA.

The training audience was composed of 49 officers, both senior and junior from the NRDC-ITA Staff, including the organization staff.

The aim of the battlefield tour was to provide through a military historical campaign – about the German victory of 1940 where in only seven weeks the German Army (Wehrmacht) defeated the French Army, one of the World’s largest armies at that time – a practical focus for the study and analysis of high command, planning and conduct of campaigns and major operations in a combined and joint context. In addition to that, Eagle Tour 07 was designed to demonstrate some of the enduring characteristic of conflict. Whilst, we shall study historical events within a wide political and military strategic context, the focus of the exercise was to draw out relevant lessons for contemporary operations at the operational and high tactical levels of war, including consideration of the land-air interfaces. Specific battlefield tour objectives were:

Word War II was the largest and most violent armed conflict in the history of mankind. Highly relevant today, WW II has much to teach us, not only about the profession of arms, but also about the military preparedness, global strategy and combined operations in the coalition war against Nazism.

The battlefields today are largely similar to what they were 67 years ago. Apart from the fact that new roads have replaced some of the old ones, the countryside of Ardennes has changed hardly since the battle took place. It remains an attractive tourist and farming area, visited regularly by veterans of both sides (although very few now), and military students, either alone or in organised tours, such as ours.

The NRDC-ITA group left Solbiate Olona on Monday October 1st (Day 1) and reached Paris by plane and from there Sedan by coach, the most appropriate means of transportation for the entire battlefield tour. The charming city of Sedan was our base during our staying in the region. It was where our hotel was located. “Le Chateau Fort” was built in the 15th century. The Castle of Sedan is the biggest castle of Europe (35.000 m2). With its strategic position on France's eastern border, it was continuously enlarged, strengthened and modernised by the powerful La Marck family, Dukes of Bouillon and Sovereign Princes of Sedan.

Truly, while landscapes are close to the ones in 1940, we only found a few traces of the fortifications, as they have been largely replaced by renewed countryside and urban infrastructure. Moreover, it is understandable that little memories of the battles still remain and, as a matter of fact, we did see many monuments and WW II-related topology as we did three years before in Normandy.

On Day 2 we visited the “Maginot Line” Museum in Fermont (a 2 hour guided visit) and the Northern edge of the defensive line in Villy La Fertè.

The Maginot Line, named after French minister of defence André Maginot, was a line of concrete fortifications, tank obstacles, artillery casemates and machine gun posts and other defences which France constructed along its borders with Germany and with Italy, in the light of experience from World War I, and in the run-up to World War II.

The French established the fortification to provide time for their army to mobilize in the event of attack, and/or entice Germany to attack neutral Belgium to avoid a direct assault on the line. The success of static, defensive combat in World War I was a key influence on French thinking. The fortification system successfully dissuaded a direct attack, but as it had been drummed up as making France invincible, the following defeat made it look like a failure.
In the afternoon the historian Dr. David Hall illustrated the Allied Plan for the defence of France and the Low Countries, with a particular focus on the Maginot Line, as the French had believed that with those constructions along their north-eastern frontier, the Germans would be encouraged to divert their main attack through Belgium, and thus attempt a repeat of their 1914 Schlieffen Plan. Particular attention was given to the tough battle that was fought to conquer the strong position when the Germans claimed to use gas to disrupt the French defence.

In the afternoon, we attended the second lecture of the “operational concept” in the Hotel and the group was divided in three syndicates with the task to develop a discussion on the following themes:

Day 3 started with a lecture by our historian in Monthermè where XLI Corps crossed the Meuse with comments on the battle and bridgehead. Later on, the group moved to Bouvignes in order to identify the position where Rommel crossed the Meuse in one of the most admirable battle actions of the Blitzkrieg Campaign. After a short stop in Dinant for lunch, a third lecture in the hotel on “C2, Generalship, Strategic bombing and Weapon of Mass Destructions (gas)” followed.

Day 4 started with a visit to Stonne with chronology of the bridgehead battle between 3 French Armd Division and the 10th Panzer Division. There, the French light tanks H-39 opposed a very strong defence counterattacking the German troops till they found out how to disrupt this efficient vehicle that gave a big contribution to make those French troops fallen in the battle eligible for an everlasting honour.

At midday, we moved to Orval Abbey for a 1 hour guided visit and then we departed to Noyers Pont Maugis where a visit to the French and German Cemetery took place. A small wreath ceremony was organized on site in order to honour the fallen of both sides. The cemeteries are on the Mafèe Heights, where the French artillery was located, overlooking the river Meuse crossing points used by the 10th Panzer Division led by General Guderian. The historian, Dr. Hill, commented on the battle action where GUDERIAN crossed the Meuse at 15.00 hrs on the 13th of May 1940.

In the hotel the forth and final lecture on “outcome and aftermath” was held by Dr. Hill preceding the 3 syndicates’ work presentations.

Day 5 was the Cultural Day and the group moved to Reims. But in the morning, a visit to the “War and Peace” Museum in Novion Porcien took place. Before arriving at the “Mercure” hotel, a visit to the Taittinger champagne cellar was carried out. In the afternoon, all the members of Eagle Trek 07 visited the Reims Cathedral where a tourist guide illustrated a lot about this incredible monument by a 1 hour visit outside and inside this Christian location. This masterpiece of gothic art dates from the 13th century as a reminder of the christening of Clovis. The cathedral was the site of 25 coronations. Adorned with over 2500 statues, this is the only cathedral to display angels with open wings, including the famous Smiling Angel on the western façade of the north portal

Finally, on Saturday (Day 6) the battlefield tour ended with the group returning to Ugo Mara Barracks, a bit tired, but having gained a lot out of the Exercise Eagle Trek 07.

In fact, HQ NRDC-ITA had a unique chance to review the setting of the “Blitzkrieg Campaign”, “modern” war-fighting battles which for the first time hit the scene and now offer lessons to be learned, to all the functional branches.