The past ten days have seen a change to the normal calm of SOLBIATE OLONA, the home of the NATO Rapid Deployable Corps Italy. 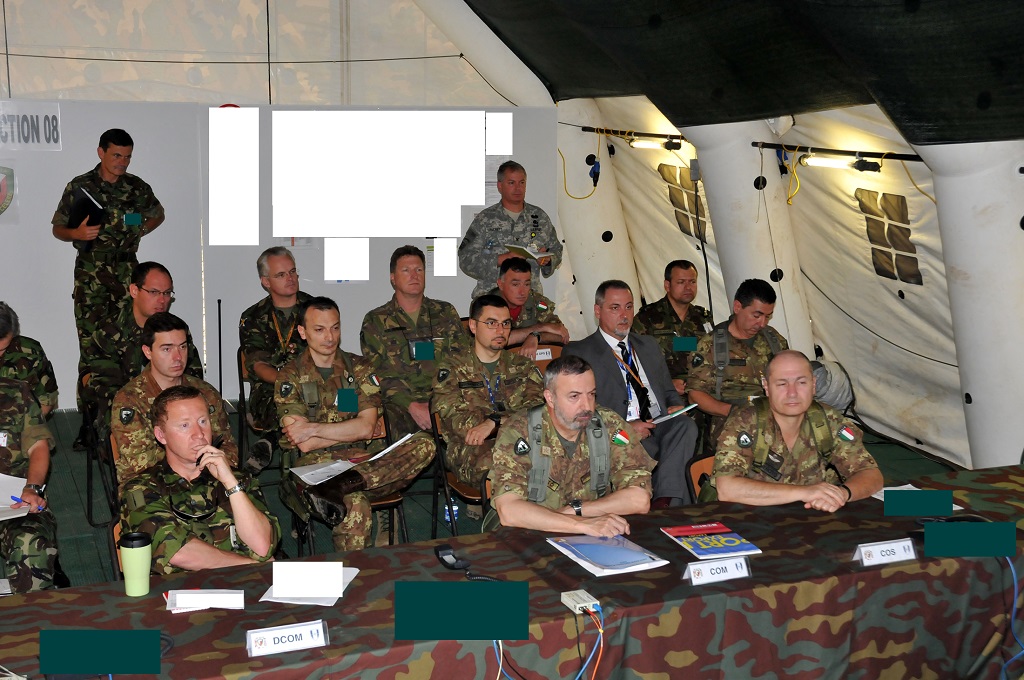 The past ten days have seen a change to the normal calm of SOLBIATE OLONA, the home of the NATO Rapid Deployable Corps Italy. The barracks and training area became the location for an exercise for a deployed Corps Headquarters and all associated support elements. The sheer scale of Exercise EAGLE ACTION was impressive and served to demonstrate the capability of the NRDC-ITA in field conditions. The exercise followed on from Exercise EAGLE RECCE conducted earlier in the year when the Recce Group, Early Entry team and Rear Support Command were exercised using a similar scenario.The scenario was loosely based on current NATO deployments in Afghanistan. For some the scenario brought back memories of ISAF VIII when the headquarters deployed to Afghanistan as HQ ISAF. For 180 members of the headquarters the exercise served to focus their minds for their upcoming deployment in 2009.

The Headquarters was fortunate enough to be able to call on the assistance of a number of external agencies which allowed for a more realistic and effective exercise structure. The Italian General Staff, Italian Staff College and personnel from the ARRC all made invaluable contributions and without their efforts the exercise would not have been possible. Additional support at HICON and LOCON made for a realistic and demanding exercise for all members of the headquarters, EXCON and the Support Brigade.

All Divisions within the headquarters were tested and put under pressure in order to ascertain their effectiveness on operations. A number of lessons were learnt and the evaluation team was crucial to the identification of areas where the headquarters’ collective performance must be enhanced. The additional training support from Crown Media, under the control of EXCON gave further depth to the training and allowed members of the headquarters to be exposed to another dimension of the Contemporary Operating Environment - the media.

The tempo and complexity of the scenario served to highlight to all concerned, how important a joined up and rehearsed headquarters must be to achieve an effective and robust battle rhythm. The headquarters was very successful in achieving its mission and learned a great deal about the challenges that will be experienced for real, all too soon.