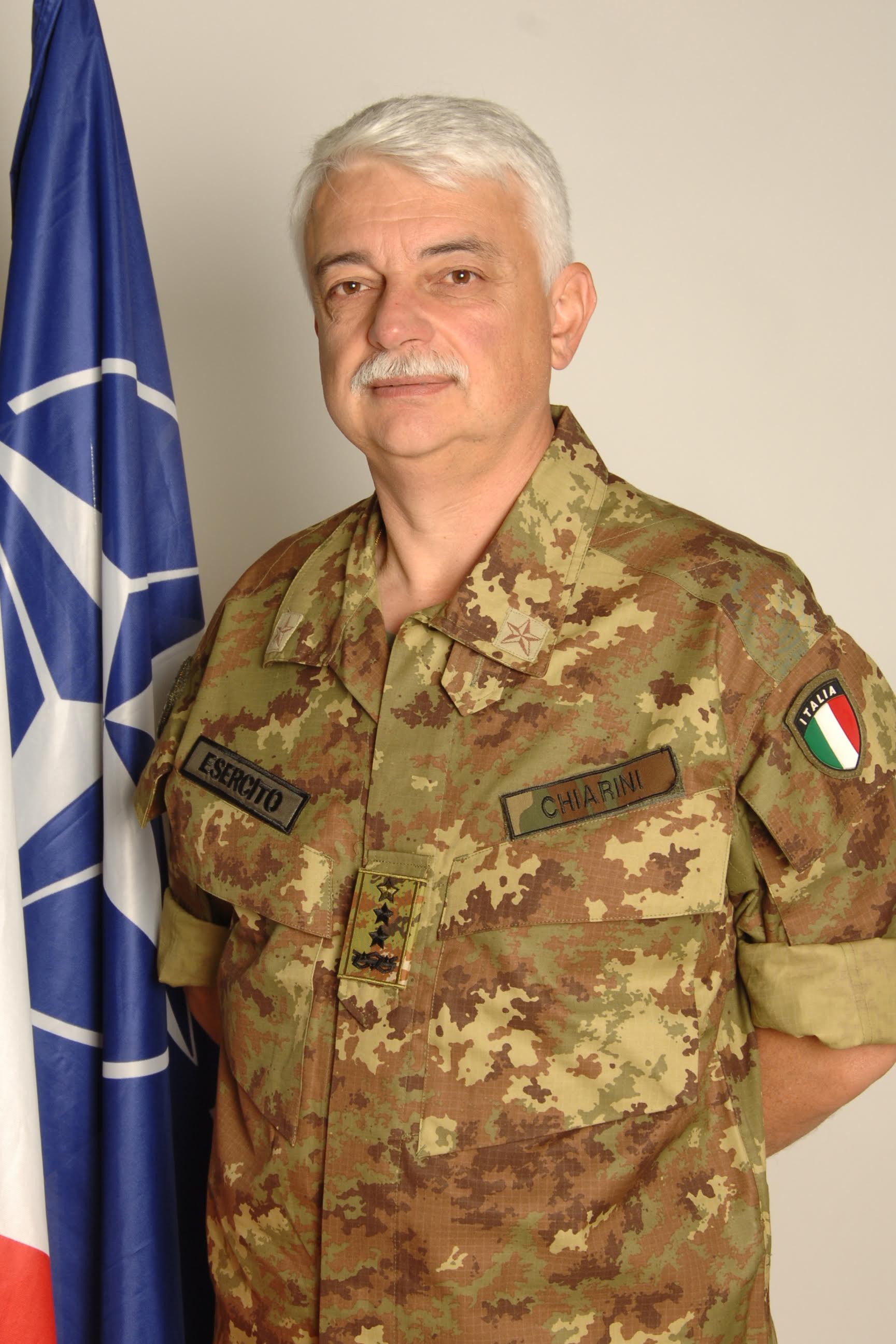 Lieutenant General Gian Marco CHIARINI was born in 1952, in Ferrara.

After attending the 153rd Military Academy Course (1971-1973) and the Military School of Application and Specialization in Turin (1973-75) he was assigned to the Tank Corps and commissioned 1st Lieutenant.

In the period 1985-88 he served as Chief Information System of the 3rd Army Corps in Milan and, soon after the War College, as Liaison Officer to the Armoured Centre in Fort Knox, (Ky-USA) (1989-91).

In 1991 Gen. CHIARINI took over command of the 1st Tank Battalion "CRACCO".

In 1992 he served as ACOS Operation and Training of the 3rd Army Corps before being appointed as Chief of Staff of the 3rd Italian Division in Milan (1993 -1995).

As Colonel, he was assigned to the ARRC HQ in RHEINDAHLEN (GE) as ACOS Combat Support first and as ACOS Fire Co-ordination afterwards (1996-1998). During ARRC assignment he was deployed in SARAJEVO (BiH) as Deputy Chief of Civil Affairs of HQ IFOR (1996).

In 1998-99 he was Commanding Officer of the 32nd Tank Regiment in Tauriano (PN) before being assigned back to NATO where he was appointed as Joint Operations Branch Chief in AFSOUTH, Naples (1999-2000). From Oct. 2000 to Apr. 2001, he was COMKFOR Executive Assistant, in Pristina, Kosovo.

On 1 January 2001 he was promoted Brigadier General and in May he was appointed as IT Rapid Reaction Corps Chief of Staff in Solbiate Olona (VA), keeping the post until the FOC of the Corps was certified by NATO.

In the following tour of duty (1 March - 1 September 2003) he was the Commander of Multinational Brigade-SE (Salamander) in Bosnia- Herzegovina.

In October 2003 he took over command of the 132nd “Ariete” Armoured Brigade. His command included the deployment as IT JTF IRAQ Commander in Nassiriyah, during the operation “Antica Babilonia”.

While serving in IRAQ “Ariete” Brigade was involved in the know fights of 6 April and 14 May 2004 with the Shia’a rebel forces of the Ansar al Mahdi. While serving at the Army General Staff in Rome as Deputy Chief Department for Operations and Training (Nov. 2004 to Dec. 2005) he was promoted Major General (1 Jan 2005).

From 6 December 2005 to 5 December 2006 Lieutenant General Chiarini commanded EUFOR in Bosnia and Herzegovina.

He assumed the post of Deputy Commander of the Allied Rapid Reaction Corps in Rheindahlen (Germany) on 5 March 2007.

He attended Turin University where he graduated in History in 1987 and in Military and Strategic Science in 2000.

Lieutenant General CHIARINI 's decorations include, among others:

He assumed the Command of NRDC –ITA on 27th August 2008 and he was promoted Lieutenant General on 1st  January 2009.

On 2011 He was appointed Italian Military Representative to the NATO and EU Military Committees.
He is married to Mrs Claudia and they have one son, Andrea.