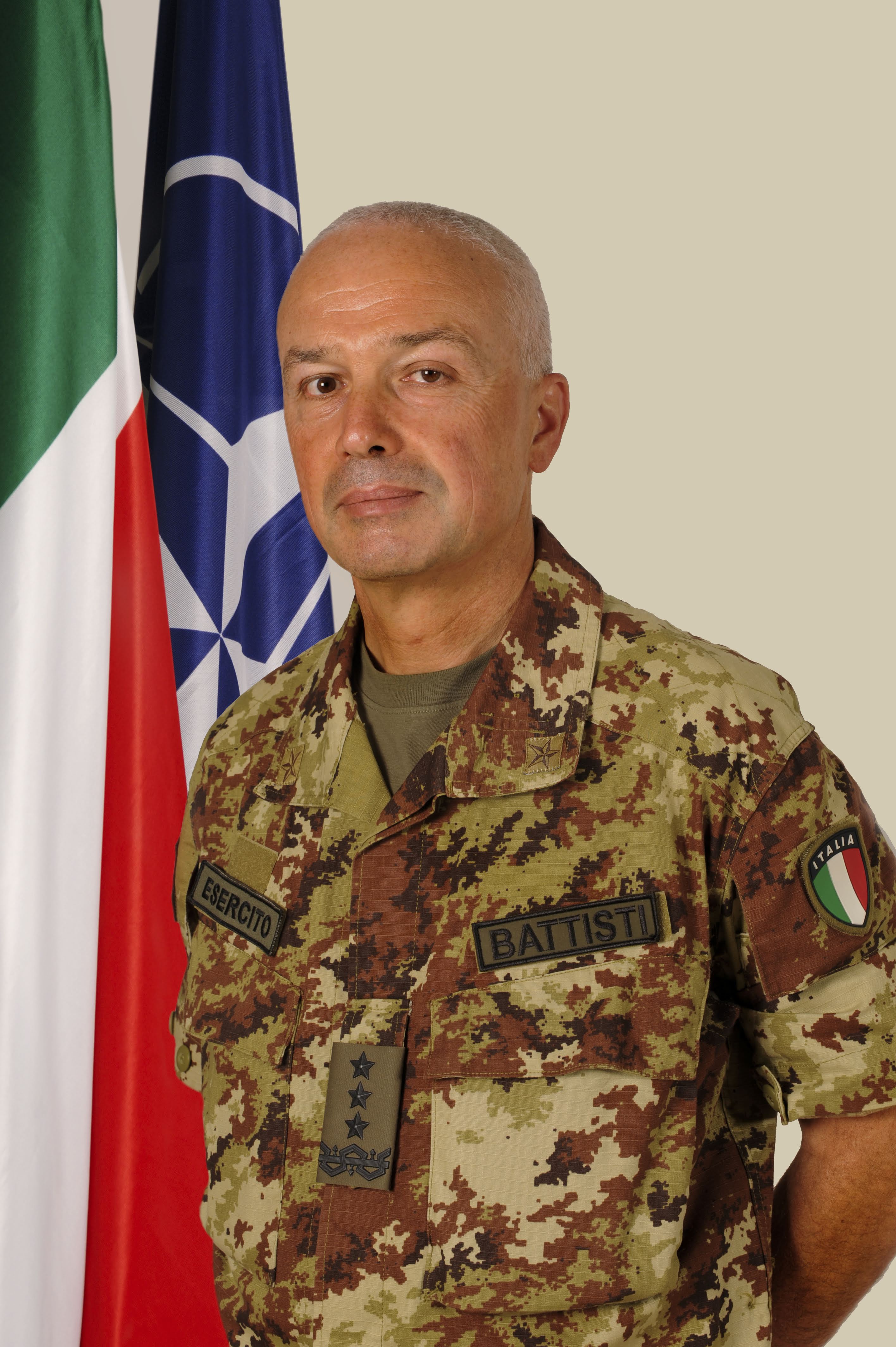 General Battisti was commissioned into the “Taurinense” Alpini Brigade in 1976, when he was assigned as Deputy Commander of the 40th Artillery Battery with the rank of 1st Lieutenant. He then commanded various battery-level units affiliated to the Italian contingent at the Allied Mobile Force (Land) (AMF (L)), and took part in 21 NATO exercises.

Once promoted to the rank of Lieutenant Colonel, he commanded the “Conegliano” Artillery Group, of the “Julia” Alpini Brigade. In 1997, upon promotion to Colonel, General Battisti returned to the Italian Army Military Academy, as the Commander of the Cadets’ Regiment.

General Battisti has extensive experience both as a staff officer and an operational Commander. He has a wide-ranging background that includes operations in coalition environments, at the tactical, operational and strategic levels. In fact, he deployed to Somalia in 1993 and Bosnia in 1997 to take part in the ongoing military operations. Furthermore, from December 2001 to May 2002 he was the first Commander of the Italian Contingent during the ISAF mission in Kabul. He also held the appointment of the in-Theatre Italian Senior National Representative.

Promoted to Brigadier General, in 2002 he assumed command of the “Taurinense” Alpini Brigade. At this time he deployed to Afghanistan to be the Commander of first “Nibbio” Mission, within the framework of Operation Enduring Freedom and the ISAF Mission, as well as the Italian Senior National Representative.

Throughout his career, General Battisti has held several appointments at the Army General Staff, serving in various capacities, such as Staff Officer at the Information Technology Branch, from 1988 to 1990, Section Chief of the Office of the Army Deputy Chief of Staff, from 1991 to 1993, as Chief of the Ops Center, from 1994 to 1997, and as Chief of Plans and Situation, from 1999 to 2001.

Further on, in late 2003, he stepped down as Brigade Commander to become the Deputy Head of the General Affairs Department, and then Head of Department from 2005 to 2006. In the latter capacity he was also appointed as the Italian Army Official Spokesperson.

Promoted to Major General in 2006, he deployed to Afghanistan for the third time, as Deputy Chief of Staff Support at ISAF Headquarters and Italian Senior National Representative.

He assumed command of the NATO Rapid Deployable Corps – Italy on 30 June 2011. After this period of Command, on 2014 He was appointed Army Infrastructure Inspector.

Amongst his many distinctions he has twice received honours from the Ordine Militare d’Italia for outstanding service in Afghanistan. He firstly received the Croce di Cavaliere for the ISAF Mission and was then awarded the Croce di Ufficiale for Operation Enduring Freedom. He was also awarded the Italian Commemorative Cross for UNOSOM Operation in Somalia in 1993. Additionally General Battisti received the US Bronze Star Medal for the Operation Enduring Freedom in Afghanistan in 2003 and the Commander of the Order of Merit of the Italian Republic, the Officier de l’Ordre National du Mérite of the French Republic, the UN Medal, the French and Polish Commemorative Medal and the Spanish Distintivos de Operaciones de Mantenimiento de Paz for the ISAF Mission in 2007.

General Battisti and his wife Simonetta have three sons, Alessio, Umberto and Filippo, and a daughter, Cecilia and he cares for spending every moment of free time he can with them.

He is a non-competitive runner challenging himself on a regular basis and is an enthusiastic and sometimes suffering Inter Milan fan.