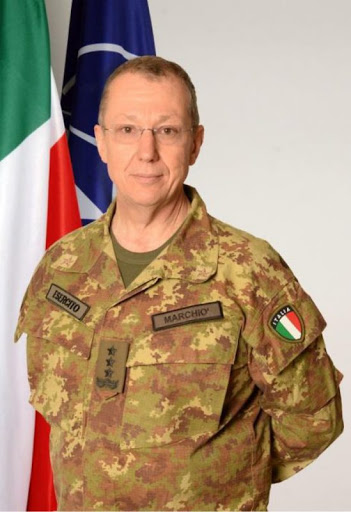 Lieutenant General Riccardo Marchiò, born in Rome on 17 September 1955, joined the Military Academy, Modena in 1974 and is a graduate of the 156th
Once completed the Italian General Staff Course, he was posted to the 3rd Army Corps Headquarters in Milan, where he first served as Staff Officer Operations and later, after attending the Advanced General Staff Course for Senior Officers, as Chief Operations.

In 1993 he took part in Operation Restore Hope (ITALFOR IBIS) in Mogadishu, Somalia and, the following year he returned to the Bersaglieri unit as a 2nd Battalion Commander.

Back to the 3rd Army Corps Headquarters, he became Chief of Staff of the 3rd ITA Division and deployed as Deputy Chief of Staff Operations of the Multinational Protection Force to Albania, in 1997.

On promotion to Colonel he became Commander of the 18th "Bersaglieri" Regiment and deployed with his unit to FYROM and Kosovo on Operation "Joint Guarantor" and Operation "Joint Guardian". In 1999 he relinquished command and attend the US Army War College (Class 2000).

In 2000, back to Italy, he became Chief Training at the Operational Land Forces Command, Verona. In 2002 he was selected to command the Italian Contingent in Afghanistan within the International Security Assistance Force in Kabul.

In June 2012 he assumed the post as Head of Intelligence Department at the Italian Prime Minister Office.

He assumed command of the NATO Rapid Deployable Corps – Italy on 24 November 2014.

On 2016 He was appointed Commander of the Operational Land Forces Command and Army Operational Command.

He has received the following awards and decorations:

Knight of the Military Order of Italy;
Silver Cross for Army Meritorious Service;
"Mauriziana" Medal;
Commander of the Order of Merit of the Italian Republic;
US Bronze Star Medal for the Operation Enduring Freedom in Afghanistan.
"Loya Jirga" Afghan Medal;

He is married to Laura and they have two sons, Andrea and Stefano. His interests are: reading, skiing and flying ultra-light aircraft.