TORRE VENERI (LE), October 17th 2014 - The visit of the Chief of Defence, Admiral Luigi Binelli Mantelli, marked the conclusion of Exercise JOINT EAGLE 2014, an International exercise involving approximately 2.000 troops conducted in Lecce and Ferrara. The exercise trained two commands; NATO Rapid Deployable Corps-Italy (NRDC-ITA) and the Joint Force Air Component (JFAC). Land, Air, Maritime, Special Forces and Logistic troops were involved for two weeks in the training organized by the Command Operational Interagency (COI). Exercise JOINT EAGLE was the result of the integration of two separate exercises: Ex EAGLE JOKER 14 for NRDC-ITA and Ex VIRTUAL FLAG 14 for JFAC.
The activity was attended by representatives of 15 countries of the Alliance and demonstrated the Italian commitment to adopt the NATO force structure. The force structure requires a command and control capable of operating with the various armed forces of the Allied countries and conforms to the Connected Force Initiative (CFI). This aims at maintaining the opportunity to train with the same resources. We do not intend to give up our operational capability even in a situation where we must pay due attention to financial resources, highlighted the Chief of Defence.
During the visit to the command post, built in the training area of Torre Veneri (LE), the Chief of Defence, answering questions from the press, pointed out that: This activity today is the tangible result of the NATO’s CFI, which wants to take advantage of the resources and structures of NATO forces. It enables greater and more integrated training activities by putting together resources and therefore reducing overall costs. Other visitors at the time of Admiral Mantelli’s visit were the Chief of Army Staff, Lieutenant General Claudio Graziano, the Interforce Commander, Gen. CA. Marco Bertolini, the Commander of Air Operations, Gen. D. Roberto Nordio, and other senior representatives from the Armed Forces.
NRDC-ITA is an Italian Army Command based in Solbiate Olona (VA) that, thanks to this exercise, continues on its path towards national certification of full operational capability and toward the NATO certification as a Joint and Multinational Command, deployable in a crisis situation.
At the end of a long and complex process of planning, we turn now to the execution of the Ex Eagle Joker 14, with the departure of vehicles and containers of various types for the port of embarkation from which to reach Brindisi, ending their journey in the training area of Torre Veneri (LE), where will be conduct the NATO exercise.
In everything will be used 210/2, 165 containers, 2 naval carriers, air carriers 3 and 2 rail carriers.
Between 23 September and 31 October, in fact, more than 1.500 soldiers of the 15 Nations which contribute to forming the Rapid Reaction Corps in Italy will be engaged in this important stage of the process that will allow the NRDC-ITA meet the requirements of the Forces of the new structure of the Atlantic Alliance.
The exercise, scheduled since long time, in fact, part of the transformation program announced by NATO at the summit in Lisbon in October 2010.
Exercise Eagle Joker 14, involving numerous Institutions, Commands and Units of the Armed Forces, is designed to verify the ability of NRDC-ITA independently manage naval and air forces in operations, to effectively interact with the not military actors not present into crisis areas and to develop and apply concepts introduced recently, such as the Cyber Defence, defense against cyber threats.
Only three of the nine commands Rapid Reaction Corps in Europe were chosen at the time for this evolution, which - when completed - will allow the NRDC-ITA to confirm a key resource for the Country and, as Headquarters projection capabilities Interagency Command and Control, for the Atlantic Alliance. 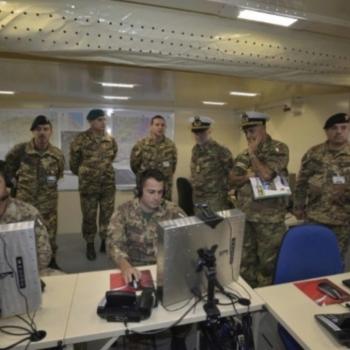