SOLBIATE OLONA (VA), 24 OCTOBER 2014 - General Sir Adrian Bradshaw, NATO’s Deputy Supreme Allied Commander Europe (DSACEUR), this morning visited the HQ of NATO Rapid Deployable Corps-Italy (NRDC-ITA) at Ugo Mara Barracks in Solbiate Olona (VA).
Upon arrival, DSACEUR was welcomed by the NRDC-ITA Commander, Lt General Giorgio Battisti, who had just returned from Salento where exercise Eagle Joker 14 concluded last week.  This exercise involved personnel from all nations that contribute to NRDC-ITA and was integrated with exercise Virtual Flag 14 and Joint Eagle 14.
After the traditional signing of the Roll of Honour, General Bradshaw met with the Senior National Representatives of the fifteen nations that contribute to the Command at NRDC-ITA. During his visit, General Bradshaw was updated on the development of activities that will enable NRDC-ITA to reconfigure as a Joint Task Force Headquarters (JTFHQ ) with an increasing presence of Naval and Air Force personnel with a capacity to command at the Operational Level as well as the Tactical. DSACEUR was shown the functional capabilities and logistical support that the NRDC-ITA Support Brigade has available to support the unique structure of the Command.
Before departure, DSACEUR expressed his appreciation for the Italian political support and on-going work at NRDC-ITA to meet the NATO level of ambition. 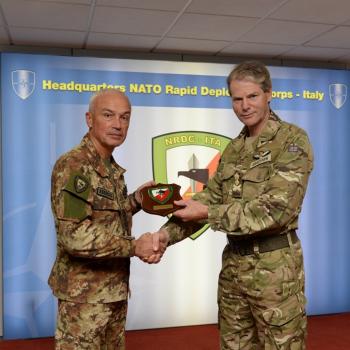 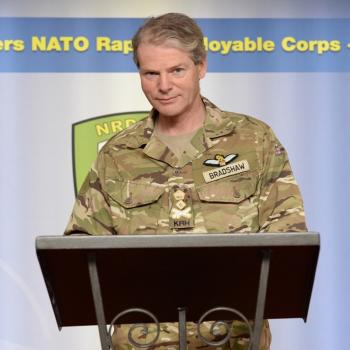