SOLBIATE OLONA, 24 NOVEMBER  2014 – The change of command ceremony took place today at Ugo Mara Barracks in Solbiate Olona (VA), home to NATO Rapid Deployable Corps - Italy (NRDC- ITA). Commander of Italian Land Forces, Lt General Alberto Primiceri oversaw the handover from Lt General Giorgio Battisti to Lt General Riccardo Marchiò.
In his farewell speech, Lt General Battisti highlighted NRDC-ITA’s Joint and multinational makeup. He stressed that a key strength in the Headquaters from the 15 contributing Nations comes from the diversity and experience of its personnel, something which demonstrates the cohesion and collective response that participating nations want to express. It is expected that, from 2016, Croatia and Albania will also join NRDC-ITA to further enhance the variety of expertise and capability of the command.
Lt General Battisti recalled how NRDC-ITA is fully integrated in the local community, in the province of Varese and in the municipalities of the Olona Valley. He encouraged the continuation of this integration and collaboration and also the continuation of the community spirit of NRDC-ITA families and staff, a spirit that manifests itself in the numerous associations, such as schools, sports groups, social clubs and other organisations.
Lt General Battisti, an Officer of the Alpini, commanded NRDC-ITA for over three years since 30 June 2011. Under his command, NRDC-ITA has conducted numerous operations and training missions, including International Security Assistance Force (ISAF) in Afghanistan in 2013, during which Lt General Battisti was Chief of Staff.
As he leaves Lt General Marchiò in command, Lt General Battisti will now hold the post in the Italian General Staff as Inspector of Infrastructure Army.
The presence of the Veterans Associations with ensigns from local regions and provinces added solemnity to the event and enhanced the community feeling for all those in attendance at the ceremony. 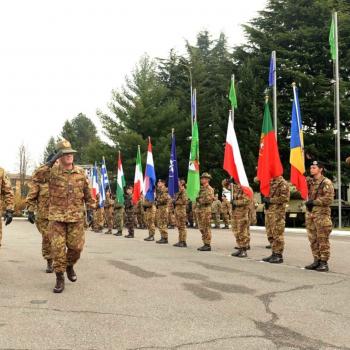 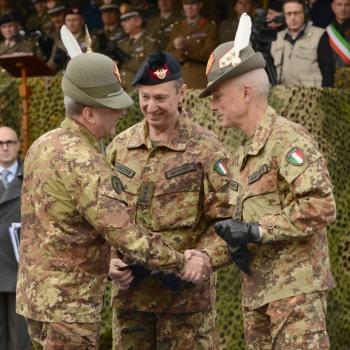 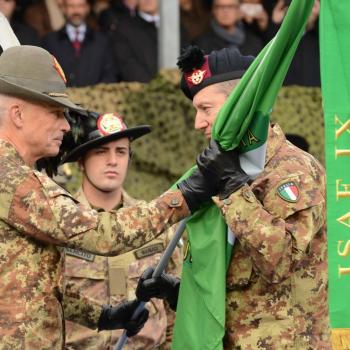 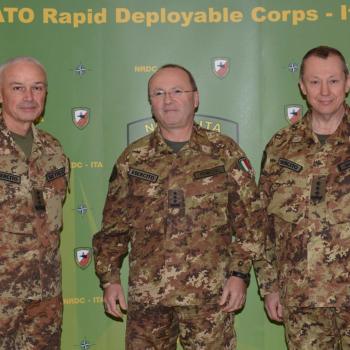