Delegates from the Italian Ministry of Foreign Affairs outlined their vision of the future relationship with Afghanistan and highlighted real examples of progress as part of an ISAF pre-deployment seminar at “Ugo Mara” Barracks. SOLBIATE OLONA (VA), 12 NOV 2012. Delegates from the Italian Ministry of Foreign Affairs outlined their vision of the future relationship with Afghanistan and highlighted real examples of progress as part of an ISAF pre-deployment seminar at Ugo Mara Barracks.
The seminar was part of Exercise EAGLE FOCUS 3, the last exercise to be based at Solbiate Olona before elements of NRDC-ITA deploy to Kabul, Afghanistan, in 2013.
In a talk entitled  Afghanistan: from Transition to Transformation, Counsellor Giuseppe Badagliacca, Deputy Head of Division for Afghan and Regional Dimension, highlighted areas of progress in Afghanistan, focusing on political improvements in government and in female representation, and socio-economic gains in basic health services and education.
He explained the need for the public to be aware of the contribution already made by Italy and other international partners, and what is demanded of Afghanistan in return.  For Italy, he stressed, the priority in this regard was consideration of women’s and human rights.
Part of that contribution includes what the Counsellor Badagliacca described as an Afghanistan success story, the Italian efforts in Heart, which he said were a development model for Afghanistan.
The overall aim for Italian military and diplomatic efforts in Afghanistan, according to the talk, was to accompany Afghanistan from the decade of Transition to the decade of Transformation, in other words helping Afghanistan to become self-autonomous.  Key issues, at present, are levels of poverty, the continuation of drug trafficking, and remaining efforts to improve security.
Counsellor Badagliacca highlighted that NRDC-ITA members deploying to Afghanistan in 2013 would have a significant role to play, as the Transition that is planned to be complete in 2014 was said to be now entering its most delicate stage in the process.
Staff members were also fortunate enough to be briefed by the Ministry of Foreign Affairs in a talk entitled Italian cooperation in Afghanistan, which focused on the development of local institutions at provincial, district and village level, as well as detailing a number of infrastructure projects that have been undertaken.
The main sectors of Italian cooperation were explained as Governance and Rule of Law, road infrastructures, health and rural development.
Examples of where funding has reached the Afghan people highlight what has been an enduring Italian commitment to Afghanistan.  Since 2006, Italy has been head of Regional Command West, based in Heart, and has taken active participation in ISAF, Operation ENDURING FREEDOM, the Nato Training Mission Afghanistan and in EUPOL. 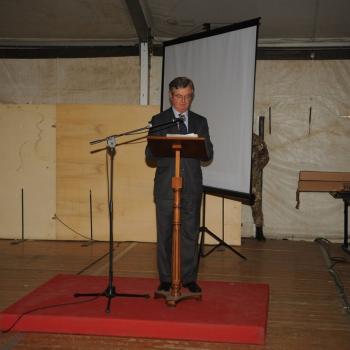 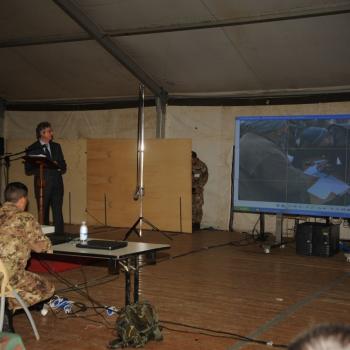