SOLBIATE OLONA (VA), 20 NOV 2012. Thank you for a great opportunity to better understand how a NATO Rapid Deployable Corps works and is structured. Allow me to say that your organization clearly deserves a special place in the NATO structure. I’m also grateful because this visit gave the chance to exchange opinions and ideas while visiting a beautiful area of Italy.
With these words , Lieutenant General Viktor Muzhenko, Deputy Ukraine Chief of Defence, ended his visit to Ugo Mara Barracks, home of the NATO Rapid Deployable Corps - Italy on 20th  November 2012.
General Muzhenko was received by the NRDC-ITA Commander, Lieutenant General Giorgio Battisti, who provided an overview on the Headquarters and future engagements. In particular, General Battisti mentioned that in January 2013 about half of the NRDC-ITA Staff will deploy to IJC and ISAF HQs in Afghanistan, following an extremely intense, yearlong training period.
NRDC -ITA  is one of the Alliance’s seven Rapid Deployable Corps Headquarters, and is one of the two high profile NATO organisations based in Italy. NRDC-ITA is a multinational Headquarters with more than 2000 military and civilian personnel. Italy is the framework nation, providing 70% of personnel, and the remaining 30% is made up of Officers, Non-Commissioned Officers and Soldiers coming from the other 14 nations contributing to the project now involves 15 Nations: Italy, Bulgaria, France, Germany, Greece, Hungary, The Netherlands, Poland, Portugal, Romania, Slovenia, Spain, Turkey, The United Kingdom and The United States. 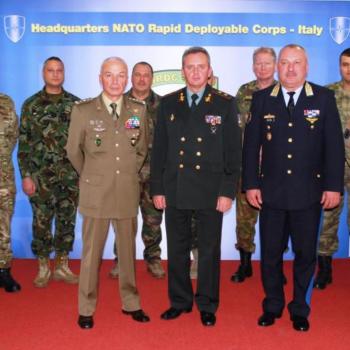