NRDC-Italy took over the NRF commitment on 1 January 2011 and since that period has acted as NATO’s high readiness force, ready to respond to any crisis as directed by the NATO Alliance.  Over the past six months the Headquarters has been ready to deploy anywhere in the world within 5-30 days and has maintained its focus and capabilities, whilst ready to deploy, through a series of training events and seminars.
Speaking after the ceremony General Battisti emphasised the importance of the commitment: The demands of the NRF commitment should not be underestimated.  NRDC-Italy conducted a series of demanding exercises during 2010 to ensure we were ready to respond to any crisis, anywhere in the world.  Whilst the Headquarters was not tasked by NATO we stood ready to deploy and maintained our focus through regular training events and briefings.  Recent events have clearly demonstrated how rapidly a crisis can emerge and it is essential that we maintain our ability to influence such events quickly.
Whilst the NRF commitment has passed, NRDC-Italy remain focussed on maintaining their operational effectiveness and are preparing for their next challenging exercise, Ex EAGLE ROSTER 11, in October 2011. 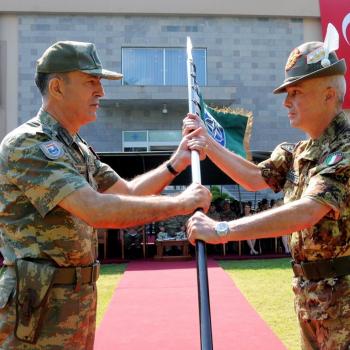