SOLBIATE OLONA (VA), 15 June 2011.  The UK Contingent at NRDC-ITA celebrated the official birthday of Her Majesty Queen Elizabeth II at Ugo Mara Barracks in Solbiate Olona.  The event, hosted by Major General Tom Beckett, Deputy Commander NRDC-ITA, was attended by Major General Leonardo di Marco, Chief of Staff NRDC-ITA, officers from the 15 nations contributing to NRDC-ITA and local dignitaries.
Whilst the celebration was principally aimed at celebrating the birthday of Her Majesty Queen Elizabeth II it also provided an opportunity to celebrate the best of British.  Guests were welcomed by a Scottish piper before moving to the reception area which was decorated in the red, white and blue of the flag of Great Britain.  Guests were then served a selection of drinks and light snacks, including Pimms the traditional British fruit punch, whilst being entertained by the Salon Orchestra of the Central Band of the Royal Air Force.  A video of the Trooping of the Colour parade in London, the official celebration of Her Majesty’s birthday, was also shown.
A short speech was made by Major General Beckett in which he explained the role of the Queen in British and Commonwealth life before thanking the assembled guests for sharing the celebrations.  Major General Leonardo di Marco then said a few words of thanks on behalf of COM NRDC-ITA and those present, during which he joked that the day was a double celebration as it was also Italian Artillery Day!  The UK national anthem was then played and all present toasted Her Majesty The Queen before the Italian national anthem.
Wing Commander Bob Whitworth, the event organiser, said: Our celebration of Her Majesty The Queen’s birthday has provided an excellent opportunity to share some elements of British culture with our friends and colleagues.  We are well looked after by our Italian friends at NRDC-ITA and opportunities like this, to return that kindness, are extremely important. 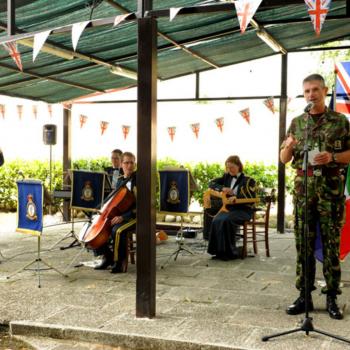