SOLBIATE OLONA (VA) 22 MARCH 2010. Lieutenant General Charles Bouchard, Deputy Commander of Joint Forces Command in Naples, visited the NATO Rapid Deployable Corps in Italy (NRDC-ITA), today in Ugo Mara Barracks in Solbiate Olona, leaded by General Gian Marco Chiarini.
General Gian Marco, the Commander of NRDC-ITA, briefed General Bouchard about organization, tasks and commitments of NRDC-ITA. General Chiarini emphasized the fact that NRDC-ITA is the only NATO HQ in Italy able to be deployed in a very short time (5-30 days) in whatever critical area in the world in order to lead a NATO mission.
The briefing focused on the next operational activities of the HQ; the commitment next year to the NATO Response Force (NRF). NRF is a task force composed of land, sea and air elements, belonging to NATO contributing nations, tailored and trained to deploy rapidly and to conduct individual missions wherever NATO requires. NRF can count on 25.000 soldiers and during 2011 NRDC-ITA will lead the Land component of NRF.
During its history, NRF has been called to intervene to support people during the hurricane Katrina in the U.S.A. (august 2005) and also in Pakistan hit by a terrible earthquake (8th of October 2005).
NRDC-ITA will dedicate 2010 to training activities in preparation for NRF. Three big exercises are going to be performed during June, October and December, during which all personnel will be used to validate the effectiveness of HQ working procedures.
The visit of General Bouchard ended in the afternoon after a sightseeing-tour of the city of Milan.
The approval received from General Bouchard – declared General Chiarini – shows us that NATO is confident in NRDC-ITA, an HQ that continues to provide a great contribution in terms of professionalism and image both in Italy and abroad, measuring up its capabilities in an excellent way with the Armed Forces of the other contributing countries. 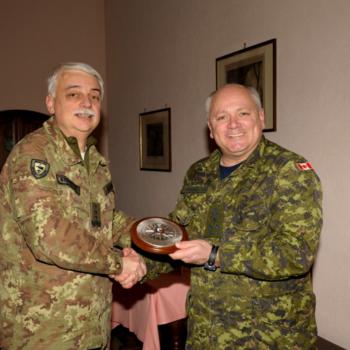