NEW CHIEF OF STAFF AT NRDC-ITA

On 20 September 2010 there was a change in senior leadership at the NRDC-ITA when the Chief Of Staff, Major General Paolo Serra handed over to Major General Leonardo di Marco.

SOLBIATE OLONA (VA) 20 SEPT 2010. On 20 September 2010 there was a change in senior leadership at the NRDC-ITA when the Chief Of Staff, Major General Paolo Serra handed over to Major General Leonardo di Marco.
General Serra, who is an Italian Mountain Troops (Alpini) officer has served in various Mountain Troops units and in both the General Defense Staff and the General Army Staff in Rome.  He has extensive international and operational experience having served as the Italian Army Attaché in Washington (USA), Commander of the Alpini Brigade Julia and also commanded the NATO Regional Command West in Afghanistan.
General di Marco is an Artillery officer with extensive NATO experience having served in various NATO headquarters including the Allied Rapid Reaction Corps (ARRC) in Germany and ISAF HQ in Afghanistan, as well as a previous tour of duty with the NRDC-ITA.  General di Marco was Deputy Commander of the Multinational Division South East (MND-SE) in Iraq and Deputy Chief of Staff Operations in ISAF.  Closer to home he commanded the Italian Artillery Brigade and has recently completed an appointment at the Supreme Headquarters Allied Powers Europe (SHAPE) in Mons, Belgium as Deputy Chief of Staff Support.
After a short but intensive hand over period, General di Marco has assumed his appointment at NRDC-ITA.  He arrives at a busy time as the NRDC-ITA completes as series of demanding exercises in preparation for the NATO Response Force (NRF) commitment in January 2011. 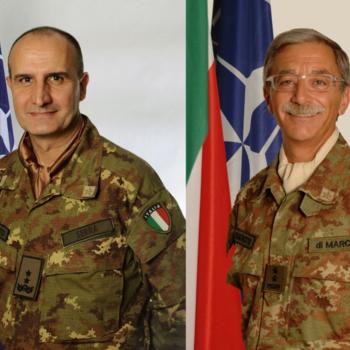