SOLBIATE OLONA (VA), 19 May 09. The NATO Rapid Deployable Corps – Italy (NRDC-ITA), situated in Solbiate Olona within the Ugo Mara barracks and commanded by Gen. Gian Marco Chiarini, has just returned from Civitavecchia (Rome), where the HQ completed exercise EAGLE DAGGER 09.
This exercise was part of the annual training activity designed to maintain the high readiness capability for the Corps and its dependent units – Gen. Charini said – About 950 troops, including a group of 30 augmentees from the 14 NATO member countries, participated in the exercise.
The exercise was conducted in close cooperation with the Italian Army Simulation and Validation Centre (Ce.Si.Va.) in Civitavecchia, near Rome, and some aspects of the exercise were conducted and replicated in the Ce.Si.Va simulation system (SISCO) itself.
NRDC-ITA played a role in Command of a NATO-led operation in a crisis area where the mission was to ensure the cease fire between the various opponents held, allowing peace and stability to flourish.  The HQ faced a series of challenges and problems, some of which were not purely military, to solve throughout the exercise deployment.
During the exercise the logistic support units and personnel received realistic training, not only as part of the exercise scenario, but through the establishment and maintenance of the HQ in the field, and the provision of real life support to an exercise of this kind.
Currently, NRDC-ITA has a group of about 150 of its personnel in Afghanistan as part of the ISAF mission, and a unit of 50 specialized in telecommunications.   Exercise EAGLE DAGGER 09 provided a welcome opportunity to conduct realistic training for those members of the HQ remaining in Italy. 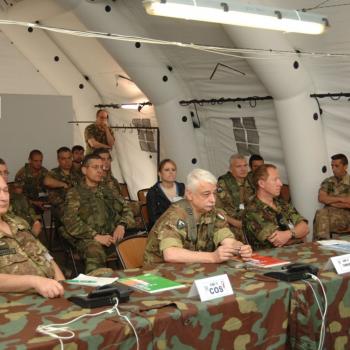