NEW CHIEF OF STAFF AT NRDC-ITA

The 25th of May 2009 viewed the handover between Major General Antonio Satta, NRDC-ITA COS for two years, and Major General Paolo Serra. SOLBIATE OLONA (VA) 25 MAY 2009. The 25th of May 2009 viewed the handover between Major General Antonio Satta, NRDC-ITA COS for two years, and Major General Paolo Serra.
General Satta, Italian Paratroops officer, served in Folgore Paratroops Brigade units, then in staff positions in the Italian General Defense Staff in Rome. He participated to numerous military missions abroad (Lebanon, Somalia, Kosovo). During the period as 23rd Commander of the Folgore Brigade in 2005, General Satta has been Commander of the Regional Command West in Herat, Afghanistan.
As NRDC-ITA COS he coordinated all the most important activities of the Corps, such as the deployment to Afghanistan of a consistent part of NRDC-ITA personnel in the ISAF HQ, in Kabul, still ongoing. He is going to cover a prestigious international position.
General Serra, Italian Mountain Troops (Alpini) officer, served in various Mountain Troops Units (Orobica, Tridentina and Taurinense Brigades) and both in the General Defense Staff and in the General Army Staff in Rome.
General Serra has a large international experience; he has been Italian Army Attaché in Washington (USA) and, when back to Italy, as Commander of the Alpini Brigade Julia, he also operated in Afghanistan as Commander of the Regional Command West.
After a short handing over period, General Serra is already facing all the activities of the NRDC-ITA, following the action taken in favor of the Command of the ISAF mission in Kabul. 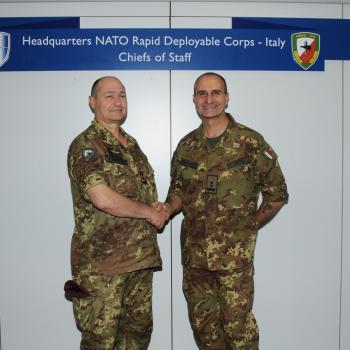