SOLBIATE OLONA (VA) – On the 18th September 2008, fifty Non Commissioned Officers from the Headquarters NRDC-ITA NCOs were involved in the first NCO’ s Professional Development. The training was the brainchild of the NRDC-ITA Command Sergeant Major, Mario Boscu ITA-A, who delivered the opening address to the audience. He highlighted the need for the modern Non Commissioned Officer to be disciplined, competent and to command respect both as leaders and as individuals, in one word Professional. The NCO must be the catalyst between the Commanders and the soldiers that operate on the frontline and provide the backbone to any military organisation.  The training itself was delivered by WO1 ITA-A Francesco Miele the Senior NCO in charge  Receipt and Distribute Centre / Sub Registry and covered the diverse nature of the role of the NCO in peace time, war time and during training.  It also included guidance for training of NCOs both for now and in the future.
2008 is the year of the Non Commissioned Officer and it is important that we reflect on what the post of NCO should mean in the Contemporary Operating Environment.  Historically Non Commissioned Officers have been described as the backbone or the oil that makes an army work.  Without them simple day to day tasks would not be achieved and in war time the leadership, guidance and support of NCO’s is crucial to the successful outcome of a mission.  In an army, a chain of command is vital to both efficiency and success, without a chain of command an army can quickly degenerate into an unorganised rabble.  The Non Commissioned Officer should be the glue that holds a chain of command together and guarantees efficiency and cohesion.  At the lowest level the Corporal conducts the day to day running of essential activities in accordance with his superior Commanders direction.  The next level up, the Sergeant is responsible for ensuring that his command is ready and able to execute a task in line with direction from on high, he is also there to advise and assist his Commander in decision making and execution.  At Warrant Officer Rank, the Sergeant Major should be the senior and most experienced soldier within the organisation; he sets the examples and acts as the lead NCO in all matters.  He must be the link between the Commander and the Commanded and ensure that both parties are all striving to achieve the same goal.  The position of NCO is one of great responsibility and brings with it pressure which an individual must be equal to.  The NCO must be able to talk and advise those senior to him and mentor and direct his subordinates, in short he must walk with Kings and yet retain the common touch.
In this year of the NCO, it is important that we clearly identify the role and characteristics that we might expect from them.  A poster celebrating the diversity and professionalism of the NCO across the Multi National environment can be seen throughout the NRDC-ITA headquarters.  At the very least we must expect, professionalism, loyalty, selfless commitment, respect and dedication, all in the pursuit of excellence. 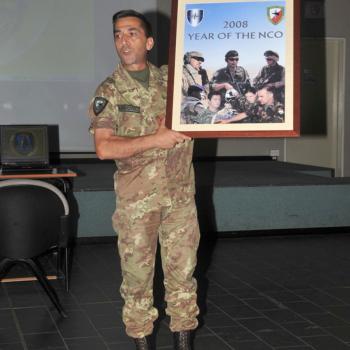 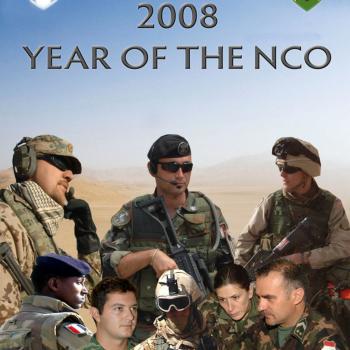