THE ORIGINS OF THE CHALLENGE COIN

the origins,  the history and traditions behind the challenge coin.

SOLBIATE OLONA (VA) 3 NOV 2008. Many of you will have seen a military challenge coin, some as a result of operations in Iraq, Afghanistan or the Balkans and others during exercises with allies.  They have become a part of military culture and reflect our pride in our different countries and military organisations.  I have just recently instigated a challenge coin from the position of Command Sergeant Major within the Headquarters of the NRDC-ITA.  For me it was essential to be able to present colleagues and friends form other organisations with a memento of this Headquarters and to be able to share with others our very special ethos.
Whilst I was designing the Challenge Coin I became interested in the origins of this unique custom and decided to try and find out the history and traditions behind the challenge coin.  There are, as with all traditions many stories which repute to be the truth behind a particular custom and this was true with the coin.  This one was one of many but my particular favourite:
During World War I, a wealthy Lieutenant in the US Army’s Air Force, ordered small, solid-bronze medallions (or coins) struck, which he then presented to the other pilots in his squadron as mementos of their service together.  The coin was gold-plated, bore the squadron’s insignia, and was quite valuable.  One of the pilots in the squadron placed it in a leather pouch around his neck for safekeeping.  A short while later, he was shot down and captured by the Germans. The Germans confiscated the personal belongings and identification from his pockets, but didn’t find the leather pouch around his neck.  On his way to a prisoner of war camp, he was held overnight in a small village near the front but managed to escape.  With great difficulty, he sneaked across no-man’s land and made contact with a French patrol.  Unfortunately for him, the French had been on the lookout for German saboteurs dressed as civilians and mistook him for a spy and immediately prepared to execute him.  Desperate to prove his allegiance and without any identification, the pilot pulled out the coin from his leather pouch and showed it to his French captors.  One of the Frenchmen recognized the unit insignia on the coin and delayed the execution long enough to confirm the pilot’s identity.
Once the pilot safely returned to his squadron, it became a tradition for all members to carry their coin at all times. To ensure compliance, the pilots would challenge each other to produce the coin. If the challenged couldn’t produce the coin, he was required to buy a drink of choice for the challenger; if the challenged could produce the coin, the challenger would purchase the drink.”
The tradition of challenging gave the coin its name and is still customary amongst many today.   The tradition of donating Challenge Coins is still around today, and the leagacy of what they provide is seen as a means of defining who we are, what we do and the exclusive club of which we are all apart.  I hope that the introduction of challege coin within the HQ NRDC-ITA will continue and become a part of the tradition and culture of this headquarters in its own right. 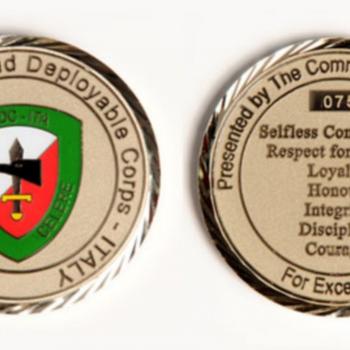