SOLBIATE OLONA (VA), 3 Jul 07. HQ NRDC-IT hosted a visit by representatives of the Defence Commission of the Italian Chamber of Deputies today. SOLBIATE OLONA (VA), 3 Jul 07. HQ NRDC-IT hosted a visit by representatives of the Defence Commission of the Italian Chamber of Deputies today.
The visit began at the HQ’s base in Solbiate Olona where the Hon. Roberta Pinotti (Commission President), the Hon. Massimo Nardi (Commission Secretary), the Hon. Pierfrancesco Emilio Romano Gamba and the Hon. Francesco Saverio Garofani received an initial briefing on the Headquarters.
Following this, the Commission members received a presentation by the Commander, Lieutenant General Mauro Del Vecchio, on the HQ’s past, present and future missions and activities, including the current commitment as the NATO Response Force Land Component Command.
Before travelling to Milan to visit the HQ’s Palazzo Cusani facility, the Honourable Members were given a tour of Ugo Mara Barracks and the equipment that HQ NRDC-IT has at its disposal.
Commenting on their fact finding mission, the Hon. Pinotti was impressed by the capacity of this Headquarters and the profound professionalism of the personnel that compose it.  The Hon. Nardi commented on the recognition this Headquarters has always received from the nations it has found itself operating with, while the Hon. Pinotti concluded that it’s a sin that this reality is not as widely known as it ought to be. 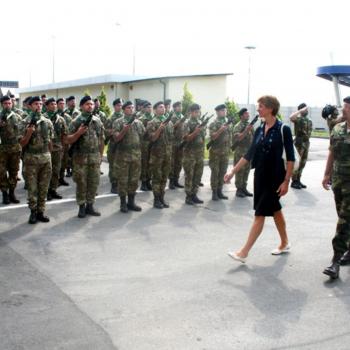 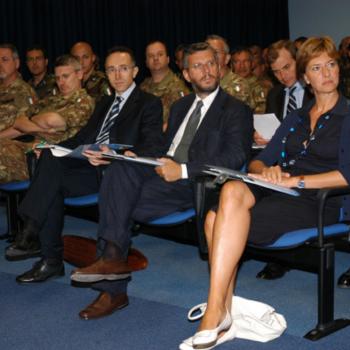