SOLBIATE OLONA (VA), 5 Sep 07. NRDC-IT welcomes two new Officers as the Romanian Contingent arrives at HQ NRDC-IT.
HQ NRDC-IT’s newest arrivals were formally welcomed today as when the Romanian flag was raised and their national anthem played at the Headquarters for the first time.
Majors Catalin Paunescu and Marian Predoaica, who arrived to take up their posts just days before, stood proudly to attention as the ceremony reached its climax in front of the assembled personnel.
Lieutenant General Gay, Commander NRDC-IT, welcomed the new arrivals during his address and wished them all the best for their new challenges.
Major Predoaica, who takes over as the Media Operations Officer, says of the occasion We are proud to be part of this Headquarters, which has proven its expertise on operations in Afghanistan.  We will do our utmost to learn as much as possible as quickly as possible, in order to perform our best for NRDC-IT.
His colleague, Major Paunescu, takes up a position in the HQ’s Finance Branch.
The arrival of these two new officers sees the HQ NRDC-IT family of nations increased to fifteen. 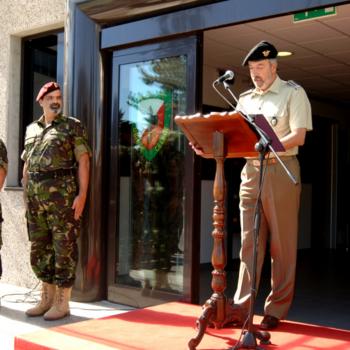 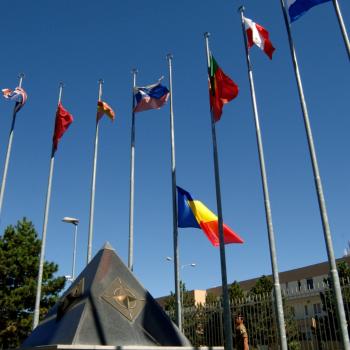