SOLBIATE OLONA (VA), 29 Sep 06.  Major General Frank Helmick, the new Commander USA Southern European Task Force, visited HQ NRDC-IT on Friday 29 September 2006.
During his first visit since taking over this summer, Major General Helmick was met by the Commander NRDC-IT, Lieutenant General Mauro del Vecchio, and introduced to key staff officers over coffee in the Officers’ Club.  The two commanders then met privately before moving off to a briefing in the main headquarters building.
The United States’ Southern European Task Force (SETAF) is based in Vicenza, Italy and provides the US with a strategically located joint task force headquarters.  Recent deployments saw SETAF leading Combined Joint Task Force 76 in Afghanistan at the same time NRDC-IT was deployed on ISAF 8.  As well as operational links, the SETAF base at Caserma Ederle provides administrative support to allied personnel serving in NRDC-IT.
While being briefed on current NATO structures and NRDC-IT roles, Major General Helmick commented on operations.  They are not going to be unilateral but combined, so NATO is very important to us.
Lieutenant General del Vecchio agreed and underlined the importance of this before inviting his guest to visit his headquarters while on exercise in the future.  Major General Helmick reciprocated I would welcome this and also invite you to visit us both in Vicenza and during training.  He added You have expertise in your staff that I would like to talk to.
The new commander USASETAF found time to sign the NRDC-IT vistors’ book before being whisked off back to a busy schedule in Vicenza. 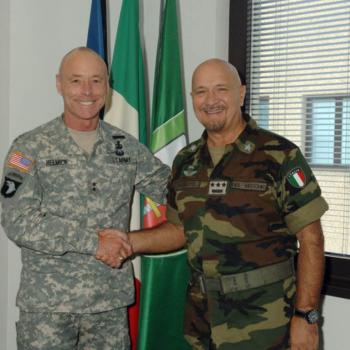