SOLBIATE OLONA (VA), 11 Dec 06.  A UK-based media skills consultancy visits HQ NRDC-IT this week.
Given the speed and mobility of modern media access to areas of operations, it is vital that military commanders understand the importance of good media relations.
For this reason, the Public Information Office has invited four members of Crown Media to help key members of the HQ understand and work in this environment.
Andy Reeds, a former UK Army media officer and David Bennett a Royal Air Force Reserve media officer and experienced civilian expert, have designed a tailor-made package.  This includes media awareness and handling lectures, which enable the HQ officers to develop their skills in front of the camera and on the radio.
As the week develops, the officers will be required to brief the media representatives on fictitious scenarios of increasing complexity.  These scenarios are designed to replicate the situations that the HQ may face if deployed as part of the NATO Response Force in 2007.  In order to ensure the training is as realistic as possible, the training team includes Lucy Jackson, a former BBC presenter and Duncan Billinghurst, an experienced cameraman.
It is vitally important that we keep the media updated on matters that are important to their audiences says Major Graham Cable, HQ NRDC-IT’s spokesman.  In order to do this, we must establish good relations with the media and be prepared to provide them with the information they need.
This is not just my job, but that of subject matter experts from around the Headquarters too, so we are having some fun putting them through their paces.
As the team looks forward to the final exercise including interviews and a press conference, not far from its mind is the fact that it could be called upon to do this for real.  That is why this training is vital concludes Major Cable. 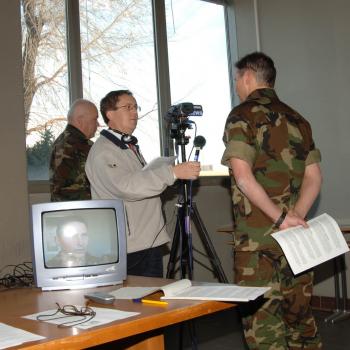 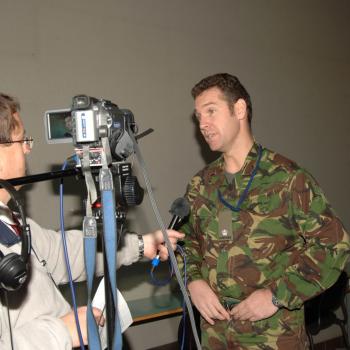