SOLBIATE OLONA (VA), 15 February 2005. 6 months before this command is due to take over the NATO HQ ISAF mission in Kabul, the staff has begun a protracted period of training. SOLBIATE OLONA (VA), 15 February 2005. 6 months before this command is due to take over the NATO HQ ISAF mission in Kabul, the staff has begun a protracted period of training. This will ensure they are sufficiently prepared for the mission and address, as early as possible, the issues which they may face.
The training began at the end of January, with Exercise Eagle Focus 1, a series of lectures on the current situation in Afghanistan. Among numerous speakers in military fields, Operation Enduring Freedom, provincial reconstruction teams and ISAF expansion were covered. A political perspective was delivered by Mr Horacio Ureta from the US Embassy in Kabul and a media perspective by Mr Andrew North of the BBC.
For security sector reform the HQ hosted Mrs Lesley Pallet of the UK FCO to discuss counter narcotics, Mrs Monika Scmitt Vockenhausen from the German Ministry of Interior to discuss the Afghan National Police and Italian Minister of Plenipotentiary Anna della Croce to discuss judicial reform. The finale of the training period was given to the commander of ISAF IV, Gen Gliemeroth, to deliver his wisdom and hope for NRDC-IT’s tour.
In the first week of February, the HQ was able to enroll the support of the UK Media Operations Training Group, under Major Andy Reeds, to deliver a week of media awareness training. The team gave spokesmen from the Staff vital practice and advice in dealing with the Press under interview and press conference situations.
The HQ training continued with Ex Eagle Focus 2, this time forcing the Staff to work in syndicates to focus on a series of issues related to the Afghan situation and NATO’s mission. This exercise will now allow the HQ to clarify many issues with Joint Force Command Brunssum, its mission HQ, to ensure the best possible preparation.
Ex Eagle Focus 3 concentrated on specific issues in the operational theatre which the Headquarters may have to deal with. Using a purpose-built training auditorium, built by the Signal Brigade, the staff were presented issues, such as cooperation with CFC-A and expanding the NATO mission throughout the country, and encouraged to identify their resolution.
The training audience was fortunate to receive the wisdom of theatre experts such as Brigadier Pounds (UK RM), former director of NATO PRTs, and Lt. Gen Martin (GE AF), Deputy Commander of CC Air Ramstein, which is due to assume command of Kabul International Airport and will therefore work closely with ISAF.
The Eagle Focus exercises now concluded, the HQ must examine the lessons it has learned and ensure they are implemented in Exercise Eagle Action and Eagle Thunder, in May and June, the main pre-deployment training for the mission. 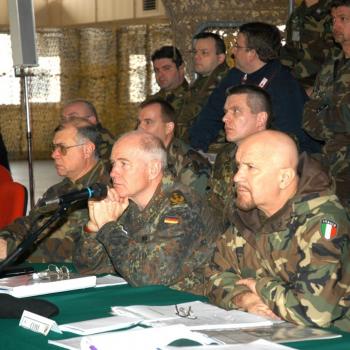 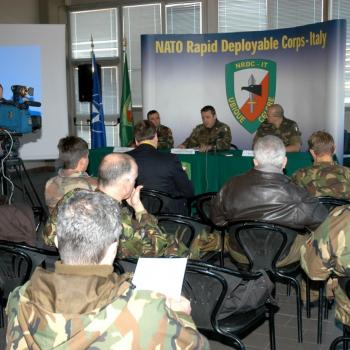 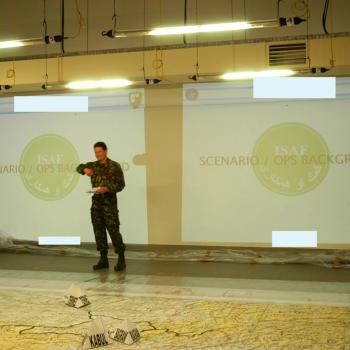