NRDC-ITA addresses the issue of stress analysis and management in the COVID-19 era.

An Armed Forces Psychologist Officer outlines the psychological aspects of extreme and unnatural conditions, such as forced isolation and interconnected fears. An Armed Forces Psychologist Officer outlines the psychological aspects of extreme and unnatural conditions, such as forced isolation and interconnected fears.

Milan, May 5, 2020. The NATO Rapid Deployment Command of Milan hosted Lieutenant Angela Boccassini, Psychologist and Psychotherapist Officer in force at the Northern Operational Forces Command, who developed the theme related to psychological problems arising from extreme situations, such as those that the whole population unexpectedly found themselves experiencing in the COVID-19 era.

Addressing such a complex topic, the qualified rapporteur stressed how dealing with a pandemic generates a significant stressful state in people, due to the fear of infecting others and being infected, to the loss of loved ones and the imposed restrictions dictated by the need to limit the spread of the virus.

The Officer outlined in a very pragmatic way the psychological aspects arising from a physical condition such as forced isolation, analysing in detail the relevant human reactions. Specifically, if, on the one hand, the current situation excludes  an emotional relationship with others, in absence of direct interaction, on the other hand, it may heighten existing interpersonal conflicts, sometimes even creating new ones.

The contribution of Lieutenant Boccassini, offered in the framework of the ongoing collaboration with other Italian Army HQs, has not only allowed a large part of the NRDC-ITA staff, connected by videoconference, to expand their specific knowledge on the current issue, but has also contributed to increase their awareness of an often underestimated problem, such as the psychological aspect of the situation.

The NATO Command in Milan continues to support the fight against the pandemic, enhancing, even in the current complex scenario, the actions implemented in favour of the staff belonging to its 18 contributing nations, whose psychological component is one of the main aspects to be preserved, in order to maintain high operational efficiency, aimed at fulfilling the tasks assigned by the Alliance. 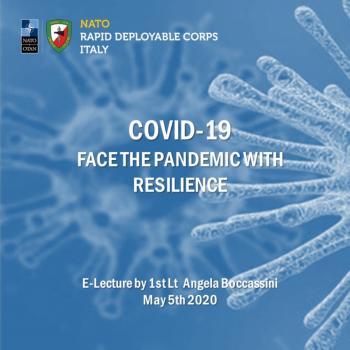