Videoconference at NRDC-ITA on how to catch opportunities in a complex world.

General Desportes illustrates the principles of strategy in a complex society, such as the present one. General Desportes illustrates the principles of strategy in a complex society, such as the present one.

Milan, May 13, 2020. Today, as part of the interesting series of conferences aimed at increasing the professional growth of the NRDC-ITA staff, French Major General (ret) Vincent Desportes presented the e-Lecture Catch opportunities in a complex world.

General officer of the transalpine army, Desportes has had a longstanding operational career, undertaking many prestigious assignments, at home and abroad. Amongst them,  a special mention goes to his presence in the United States as Military Attaché at the French Embassy in Washington. With a degree in Engineering and a doctorate in History, Desportes, who had already been involved in training and strategy during his professional career, further developed his studies in this field after his retirement. He has published numerous articles and books on the subject. He is currently an affiliated professor at the Institute of Political Studies in Paris and lectures at numerous international colleges and major corporations.

At the beginning of his speech, General Desportes addressed the concept of complexity, applied to the current world and military strategy. Whilst it provides more opportunities in the planning phase, it also makes it more difficult to predict the effects, with obvious consequences in the executive phase, and subsequently in command action. Using quotes from great strategists of the past, such as Carl von Clausewitz, Napoleon Bonaparte, Horatio Nelson, Ferdinand Foch and Charles de Gaulle, he highlighted how the principles of the art of war, even if conceived and applied at different times, remain substantially valid in the modern world.

Innovation was also discussed during the talk, in terms of adaptability and as an essential part of the planning processes at different levels and the exercise of Command and Control, especially in a historical period where the strategic space is constantly evolving, to the point that it no longer only includes the military domain, but also the political, economic, social, communication and technological ones.

Finally, General Desportes retrospectively analysed the hierarchical relationship of subordination, referring to what should be considered the essential characteristics of command action and the pillars of effective leadership: trust in one's subordinates, ability to motivate them, and coherence. In the context of careful planning, throughout the chain of command and up to the tactical level, a good balance of these elements enables to consolidate the fundamental success factors: consensus, cohesion, will and determination in pursuing the assigned objectives.

Today’s online event has allowed a large part of the NRDC-ITA staff to expand a complex topic that is extremely useful from a professional point of view, as it is closely connected to the core of their daily activities in the field of the Command of Rapid Deployable Corps. 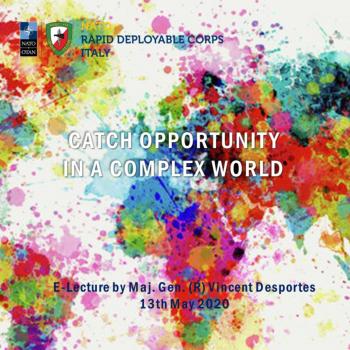 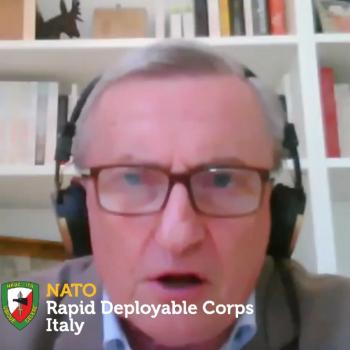