Conference in NRDC-ITA on "The beauties of Italy: restarting after the COVID-19 emergency ".

Art historian Philippe Daverio illustrates the possible cultural and tourism opportunities for Italy in view of the end of the current emergency. Art historian Philippe Daverio illustrates the possible cultural and tourism opportunities for Italy in view of the end of the current emergency.

Milan, May 12, 2020. Today, as part of the consolidated activities aimed at the professional growth of the NATO Rapid Reaction Command staff, art historian Philippe Daverio held an e-Lecture on The beauties of Italy: restarting after COVID-19.

A popular television face, author of several essays and a publisher himself, Professor Daverio graduated attended the Bocconi University in Milan, specializing in 20th century Italian Art. He has opened three modern art galleries in New York and Milan. In the 1990s, he was Councillor of  Culture, Entertainment, Education, and International Relations for the municipality of Milan.
Among his numerous interventions on the territory, we would like to mention the restoration of the Teatro alla Scala and the promotion of cultural Foundations throughout the Lombard region, activities aimed at fostering autonomy and osmosis between public and private management of cultural institutions.

With his distinctive and captivating style of communication, the speaker started the conference illustrating the concept of beauty, from both a semantic and philosophical point of view. He then clarified the difference between the simple artistic legacy and the more articulated cultural heritage, both part of the unique heritage of Italy, and the pride of the Italian people.  In this regard, it was recalled that Italy ranks first on a global scale, in terms of number of UNESCO sites of interest.

Professor Daverio also analysed the potential consequences of the current health emergency on national tourism in the medium and long term.  He described the social and behavioural aspects of the emergency with references to the major pandemics of the past and proceeded to discuss the occupational and freedom of movement aspects, with specific reference to the contingent situation, which is still evolving.

Today's activity has allowed a large part of the staff of the 18 contributing nations of NRDC-ITA, connected in videoconference, to deepen a complex and fascinating issue related to the fight against the pandemic, with an outlook on its consequences in the coming months. A specific perspective, represented by the artistic and cultural context of reference, that proved to be remarkably interesting and engaging, as highlighted by the many questions and words of appreciation addressed to the speaker at the end of his presentation. 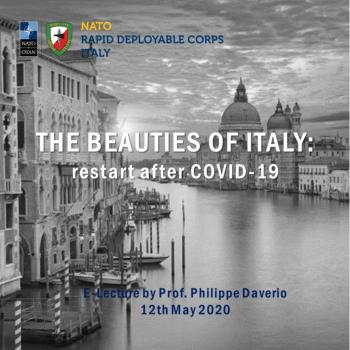 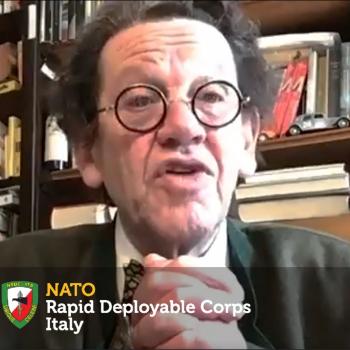