Conference at NRDC-ITA on the economic and geopolitical implications of Neo-protectionism in World Trade.

Professor Rodolfo Helg illustrated the economic impact of commercial neo-protectionism and analysed its possible consequences on a geopolitical level. Professor Rodolfo Helg illustrated the economic impact of commercial neo-protectionism and analysed its possible consequences on a geopolitical level.

Milan, May 18, 2020. As part of the consolidated activities aimed at the professional growth of the staff of NATO's Rapid Deployment Command, today Professor Helg held an e-Lecture on Neo-protectionism in World Trade: Economic and Geopolitical Implications.

A Graduate in Economics and Social Sciences at the Bocconi University of Milan, Rodolfo Helg is Professor of Economics and Dean of the School of Economics & Management at the Carlo Cattaneo University (LIUC) of Castellanza (VA). He collaborates with the Institute for International Political Studies (ISPI) in Milan and with several foreign universities in Lugano, Lille, Paris, Bangkok, Mumbai, and Shenzhen. His professional experience includes advising the Presidency of the Council, and many international bodies such as the EU Commission, the European Investment Bank and the Organisation for Economic Cooperation and Development.

After a brief historical introduction, aimed at highlighting the general economic trends from 1870 until the Great Recession of the years 2008-2010, the rapporteur analysed the progressive expansion of the globalization of markets over the past years, pointing out that the last decade has seen the world experiencing a phase of contraction, for the first time in history. He then illustrated the factors that have transformed the recession of the years 2008-2010 into an actual turning point, particularly for countries with long-established or expanding economies. The most evident and significant consequences during the following decade were the substantial downsizing of China's economic growth, leading to a progressive resorting to trade protectionism by various countries, from the most powerful ones to emerging economies.

The analysis of recent trends in the economic process, known as the Global Value Chain, i.e. the well-defined set of actors and activities that are part of the complete production chain of an asset, from its design to after-sales support, was deemed essential to understanding the concept of trade protectionism. Professor Helg illustrated how, for the first time over the last decade, such chain has shown a significant slowdown, due to three factors: a general decrease in the gross domestic product by the major economic powers; a lower interest in the relocation of production; a decrease in exports by the country who has always been at the forefront of foreign trade, i.e. China.

In such a complex economic context, already suffering from the consequences of a major recession, such as that of the years 2008-2010, the current health emergency due to COVID-19 has been defined by the rapporteur as a complete shock to the system. The probable repercussions on the medium and long term are still being studied, while the World Trade Organization (WTO) has allegedly already expressed strong concerns, fearing a collapse in trade of even greater proportions than that of a decade ago.

Today's activity has allowed a large part of the staff of the 18 NRDC-ITA contributing nations, connected through videoconference, to deepen complex and global economic and trade issues, referring to an extended period of time, yet focused in the context of the current health crisis, providing interesting ideas for discussion and reflection. 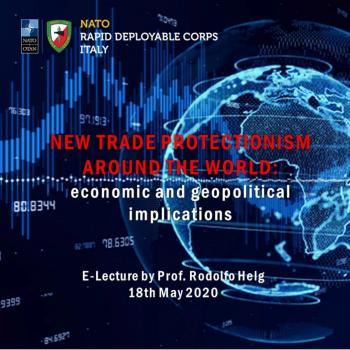 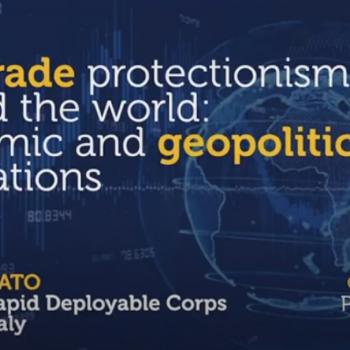